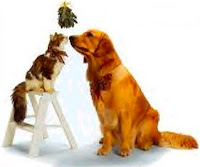 A snippet from my most recent writing of The Innkeeper's Christmas for 2009's Nanowrimo project.

Matthew finished tucking the sheet under like she’d taught him, then stepped next to her. Her heartbeat stormed to life as he grabbed her hands into his and pulled her close to him. A foot taller than her, she folded into him like a teddy bear to a child. She remembered this feeling. The security it provided that night of the break in. How he’d been there for her. Allowed her to fall to pieces in his arms. Well, as many pieces as she’d ever allow herself to crumble into in front of anyone.

But what was he doing...now?

Matthew shifted his feet in some strange manner. He wrapped one hand around her to rest gently on the small of her back. With his other hand he held hers out to the side, raised. Oh, my. She gasped and pulled away. Matthew was trying to waltz with her?

The hilarity of it filled her with child-like giggles. The seriousness of his expression chastised her laughter. She blinked, willing herself to get under control.

“Cut me some slack. I embarrassed myself with a teacher to try and learn these steps, Beckah.”

She grabbed his arms and started dancing like she did when alone. Wiggling her booty, with no planned steps at all, she bounced, dipped, swirled in his arm and even bumped her hip to his. Only her hip met his upper thigh, which felt firmer than she'd expected. “See, this is how I dance for fun.” To his ashen face, she gave him a peck on his cheek. “Why on earth would you ever imagine I waltzed while cleaning?”

“Everything is either animals with you, cooking, or Victorian era.” He held his hands out. “I just assumed you ballroom danced while changing sheets.”

“And you took lessons just for me?”

“If that’s how you have fun, I wanted to give it a try. I know how busy you are, and figured getting you to go out would be more burden than anything.”

She stepped back, stunned by his thoughtfulness. No one had ever understood her needs before. Matthew may not approve of how she lived, but at least he tried to work within parameters to make life easier on her. “That’s the sweetest thing anyone’s ever done for me. Thank you. And thank you for staying and helping me get the rooms cleaned up.” If one could fall in love in an instant, this one would be about perfect.

“You’re welcome.” He took her hand in his. A current travelled down her fingers, up her arm. “How about a modern day slow dance for a minute, then we can get back to bed-making duties?”

She stepped into his embrace and breathed in the orange and musk scent unique to him. It felt good to savor the smell, rather than deny its appeal once again. He slowly moved her around the room. If chore time was slipping away, she didn’t feel it doing so. Wouldn't allow it to spoil the moment. “Are you aware of how good you smell?”

Bending his head, he looked down into her eyes. His golden irises had dark flecks she’d never noticed before. “No, do I?”

Nodding, she couldn’t pull her eyes away from his…until she realized his focus shifted to her mouth. Oh, no, this can’t be. They couldn’t be about to...

She should step out of his hold. Stop this from happening.

Rewind? Couldn’t she just rewind time and never have stepped into his embrace in the first place?

His lips caressed hers, gentle, as if asking permission. They travelled to the softness of her cheek, then slowly back to her mouth. She tasted peppermint. The one he stole from her candy dish on the side board just before following her upstairs to help with the Inn’s chores. The gentleness of his touch had her insides diving and flipping. How could something so wrong, feel so heavenly? Returning his kiss, she pulled him closer, feeling his warmth transfer to her whole being. Could two opposites such as them really make a relationship work?

“Whoa.” He stepped out of their embrace with tenderness that made her long for him more, but the strain on his face caused a vice-like grip to take hold of her heart. Matthew regretted kissing her.

Merry Mistletoe Everyone! I look forward to reading all the wonderful snippets out there soon!

4 Days until we widely celebrate Jesus's Birthday on Christmas Day around the World!
Posted by Eileen Astels Watson at 6:48 AM

Great job and thanks for sharing with your readers.

Ooh, nice surprise twist at the end, definitely hooks us. So want to see where this regret will lead ...

Noo! Terrible to cut us off that way! *grin* Sure is a great hook though!

Awesome twist at the end. I loved when he said he expected her to ballroom dance while changing the sheets! What a great, insightful line. And then that kiss, with the peppermint, etc. Woot! I love it. Thanks for sharing Eileen! :-)

Since it is getting close I wanted to wish you and your family a very Merry Christmas. I hope you all enjoy a loving and beautiful day.

Great twist, Eileen! That was awesome. I enjoyed reading it!

Because I don't write a lot of romance, I couldn't really participate. But I really enjoyed reading everyone's excerpts today. Have a merry Christmas!

Great job! "Wiggling her booty" made me smile. :O)

Oh, he is SO sweet for taking dance lessons for her!!! I totally had a smile on my face while reading this! Loved it!

Oh, what a sneaky way to end it! Surely he didn't regret that kiss...

What a great scene, Eileen. The kiss is sweet, but what I like best is how you made me care about both characters in such a short time. Well done!

And I feel certain he doesn't regret that kiss. Not a guy who took dance lessons for her sake. Oh, no. I think he's afraid he revealed too much or came on too strong. One day, I'll read the whole story in published form, and I'll know. :D

Eileen:
I want to see more of this. I am hooked.

That was awesome, Eileen! Thanks for sharing it. What a perfect twist at the end. Well done.

Beautifully written, Eileen! Sounds like a wonderful story in the making!

Oh, dear. The regretted kiss. I guess he must have enjoyed it then!

Can't wait to read the book!

Wow. Love it and my heart tore when I read the word regret. I'm dying to know what is said next!

Wishing you and your family a blessed Christmas.

Thank you, thank you for sharing. I loved the peppermint breath bit. You did a great job of using the senses to pull us into the scene. Cool.

The peppermint is a good tidbit!

Sounds like a winner to me! I look forward to reading more. And would it be to soon to ask for an autographed copy?

I almost missed this juicy scene! You nailed the ending! I'll just sit here and wait for you to turn the page- LOL!

Why does he regret it!!! What a place to cut us off!

Love this! Thank you for sharing and I can't wait to read more:)