The Bartered Bride and Book Giveaway 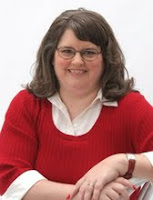 1) I understand you wrote the first draft of The Bartered Bride in five weeks. I'm curious, were there any scenes that you had to force yourself through in that time? If so, do they remain in the published version and did they require major rewriting?

Erica: This book fell together in a really amazing way for me. I don't remember struggling with any particular scene in the first draft. I've struggled more with subsequent books, and there are scenes from those that have gotten major revisions or cut altogether, but for The Bartered Bride, it survived the editing process intact.

2) You took about one month for revisions of The Bartered Bride to polish it before sending out to your critique partners, was there much revision required after seeing their critiques? How much longer did you work on it before submitting to Heartsong Presents?

Erica: I do remember getting dinged by my crit partners on one scene in the book where my heroine was coming across as too juvenile and petulant. And one scene I reworked myself to make it more realistic in my own mind. Those revisions took about a week or so, then it was off to the ACFW Conference to pitch it to an editor.

3) Publishing success has come full force at you since signing with HP.. Congratulations Erica on having six books contracted. How many of those books are ones you had completed before The Bartered Bride, and how many are slated to be written yet? Are you now selling on proposal?

In the fall of 2008, The Bartered Bride was contracted at the ACFW Conference, and a few months later, Heartsong aquired five more titles from me. I'm currently working on the final book in those two series.

I am selling on proposal now, which has its upsides and downsides. Upside, I don't have to write an entire book then hope that someone is interested in it. Downside, I have to know more in advance what's going to happen in the book, and as a reforming seat of the pants writer, this is difficult.

Thanks so much Erica for sharing a little of your publication journey with us.

Now, before I share the back cover blurb of this fast paced, wonderful novel, I just have to toot a horn for this story. Really, I can't say enough about this novel. I'm not a huge historical fan myself, and I'm the universes slowest reader, so when I read this book in under a 30 hour time span, which included sleep, the usual family and household responsibilities, and writing over 4000 words into my own manuscript, you've got to know it's a good one. And as a writer, it's one I intend to dissect for sure. But certainly couldn't the first time through because it just kept me glued with its entertainment value. Seriously, if you haven't got a copy yet, pick one up, order one, or hopefully win one (which you can do by leaving a comment with your email addy in this post by Wednesday morning when I'll do the drawing.) 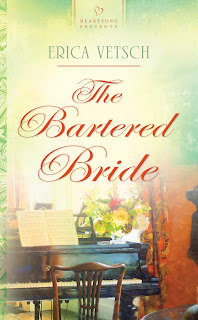 Back Cover Blurb of The Bartered Bride: Jonathan Kennebrae is furious when his grandfather informs him that his future has been decided. He will marry Melissa Brooke or be disinherited. Jonathan has invested years of his life in Kennabrae Shipping, but heaven help him if Grandfather decides to take it all away for this.

Melissa, too, is devastated when her parents make their announcement. As little more than a bargaining chip in her father’s business maneuvers, she feels her secure world slipping away. Engaged to marry a man she has never met—someone “considerably older” than herself? What have her parents done?

Can Jonathan and Melissa find a way out of this loveless marriage, or must they find a way forward together?

You can order a copy of this wonderful novel by clicking here.

Book Giveaway: Don't forget to leave a comment with your email addy to be entered into the drawing. I'll draw a name late Tuesday and announce the winner on Wednesday, Dec. 2nd. Good luck everyone!

This giveaway is closed now. Thanks all for entering!

Posted by Eileen Astels Watson at 12:01 AM

This is a great book Erica you have much to be proud of :)

I won this book a few weeks ago- great read! A storyline I would have never imagined!

Great interview. The book sounds unique and like a good read.

Erica's books are the best. I have learned more about writing tight and making every scene count from Erica than anywhere else!

Thanks for the interview, it's always interesting to read of another writer's journey.

Definitely a great recommendation. The book sounds very interesting since it has two viable options open.

Erica, I have heard WONDERFUL things about your book, so throw my hat in the ring for a possible win PLEASE!!

And Eileen, great interview. Thanks to both you and Erica for a chance to win.

Wow, I can't believe she drafted a novel in five weeks. Congratulations to Erica on the sales!

Enjoy hearing about your writing journey.

Loved learning about an author I didn't know!!! And this books sounds like a great read!!! Please enter me!

Great interview! Thanks for sharing. I'm amazed at how fast the process for this book was. Good for you.

Okay. I am gonna buy this book because I've heard so many good things about Erica's writing.

But hey, I've got a few friends who would love the giveaway, so count me in.

Always a GREAT post, Eileen! Thanks for your wonderful site!!!

It's nice to meet you, Erica. Great interview. I'm so impressed with you having six contracts under your belt...and writing from proposals...wow.

I love the blurb to "The Bartered Bride." Hope I win a copy!!

Great interview! Thanks so much for sharing it. I'd love to enter the giveaway, too:) karenelange(at)gmail(dot)com
Thanks a bunch!

This book sounds amazing! Please enter me in the contest.
christi_corbett@yahoo.com

What a great interview! There's hope for us isn't there! The book sounds great - count me in!

What a SUPER interview. Thank you Eileen. And thank you Erica. Wow! The first draft was very nano like.

Wonderful interview! I loved reading about Erica's writing. Esp. that she's a reformed SOTPer. LOL I'm not looking forward to having to know more either, if I ever sell on proposal.

Please enter me! The books sounds great. And congrats to Erica!

Erica, I'm fascinated by your designation of "recovering SOTP writer." How did you switch to plotting? As a SOTP writer, it's like trying to become a leftie when I'm write handed.

Please don't enter me in the contest. I already won Erica's book on another blog. :)

She just kept on plugging away with persistance. Awesome! Thanks for the opportunity! :O)

Hope to see you over at my new blog home www.dianeestrella.com

That was a super interview! I'd love to win a copy of the book, and if I don't I will definitely buy it. It sounds just like my kind of story.

I don't usually read historical fiction, but this book sounds pretty interesting. Good luck to Erica and all her future writings.

I read about this book on another blog. Glad it is making the rounds cause it sounds great!

Great interview! I hope someday I'll get an idea for a book that flows out in 5 weeks! Mine take a year. LOL.

Your story sounds great and I love the cover.

Would love to win a copy. But if not, I'll have to buy one.

I loved this interview! It was so interesting to hear the process of Erica's writing. I'm amazed at how fast she is able to write. It sounds like a wonderful book!

don't enter me. or put sherrinda's name in twice or something. ha!

you both know i love her.
great interview!

LOLOLOL...Jeannie, you crack me up. And you didn't even call me Ketch-Up Girl this time! lolol

It's funny, but sometimes I see a book I would really like...love!...and then I see it reviewed on all the blogs I frequent. I'd just "hate" to not comment on my favorite blogs, you know? I don't want them to feel slighted, don't you know? ;)

Congratulations to Erica from another seat-of-her-pants writer!

Thanks for the interview, Eileen.

I'm late to the party but oh I want this book so bad! *waves arms wildly* Pick me!!!!

What a neat interview. I can't believe all the books on contract!

Sounds wonderful. Please enter me. Thanks!

Love historical books. Please add me to your giveaway. Thanks.

LOVE your "Kneeling to the King." I've had my ornament for 19 years!

That is fast to write a book! Wow! martha(at)lclink(dot)com

Wonderful interview! Would love to read this book. Thanks for the chance to win a copy.

This sounds like a great book, and I'd love to read it! Please enter me in your contest.

Hi, All. Thanks all for stopping by and I wish you all luck with the random generator tonight.

Erica asked me to put this comment in for her as she is having internet troubles in blog land.

Erica says: Thank you, all, for your kind comments and for stopping by this last day of the Blog Tour for The Bartered Bride. And Thank you, Eileen, for hosting me here. The responses have been so very encouraging.

To Susan, who asked about my transition from SOTP to Plotter. I had to make the move to plotter because after the first sale, I began selling books on proposal and had to know in advance where the story would go. Prior to selling The Bartered Bride, I always wrote the story first, then wrote the synopsis after I knew what happened. :)

Again, thank you, everyone!

Count me in too! Sounds like a lovely book!

I've been following Erica around the blogosphere and learning more at every stop.
I'd like to be in the drawing for The Bartered Bride, pretty please.